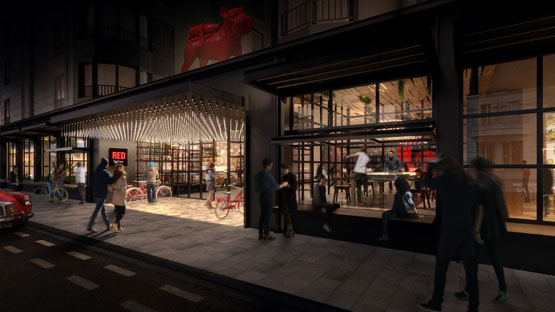 Radisson Hotel Group (RHG) approached us to devise an impactful audience experience for those attending their US business conference in the Spring. This event was held in Orlando and had a focus on promoting five of the key hotel brands to, clients, developers, and staff.

We had originally produced a series of virtual environments to support the creation of photorealistic media for the initial presentation of the revised design concepts. Following a full creative discovery process with RHG, four distinct engagement formats were selected to ensure that all delegates could interact with the new brand identities at least once during the event.

This included two immersive Reality Portals™ and a room- scale virtual reality lab; which in both cases allowed attendees to gain a memorable, first-hand appreciation of the new spaces.

Two augmented reality mobile apps were also created, using the latest platform innovations to allow users to explore the rooms; both at the conference and on their own devices thereafter.

These apps enabled seamless access to the full suite of computer-generated imagery, and also featured an AR capability known as the ‘Magic Door’™. The Magic Door feature is a form of augmented reality application that allows viewers to project a virtual representation of a room that can be explored by simply walking around whilst viewing through the mobile device.

Each of these interactive platforms increased excitement among attendees and were extremely well received across all delegate segments. The use of the technology deployed in delivering the new concepts was successful in maintaining a high level of engagement throughout the event by delivering key information in a highly accessible and enjoyable manner.